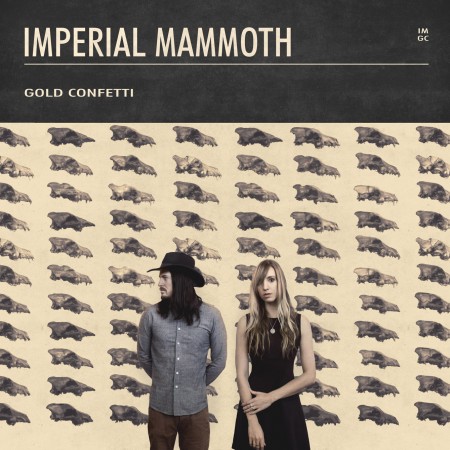 Imperial Mammoth is a band formed by Leonard Jackson and Laura Jane Scott. Their electro-indie sound is what drew me to them in the first place. One of my favourite aspects of music is its ability to create an otherworldly atmosphere. Imperial Mammoth manage to spellbind the listener in this fashion in their new album Gold Confetti to be released June 24th 2014.

Gold Confetti starts off upbeat with “Fifty-Five Fires” which sets its tone with their fun, electro style and catchy choruses. Scott’s voice is used to highlight the song at the bridge and is an effective way to add a certain amount of intrigue. You definitely look forward to hearing her more in the next songs.

In the second track “The Limitless Hours,” there is a sense of longing for what’s passed. It’s as though there was something that went wrong and it’s too late to fix. That longing can be felt in the particularly dreamy quality of the melody, as though someone was caught in a looping scene from the past. The futility of there ever being a change in this case is the predominant sentiment.

Another favourite is “The Last One To Leave The Party” which also has an element of longing in it. The verses are filled with the vivid images of someone met a while ago that has a vice grip on a person’s mind. The song is filled with determination to reunite against the odds.

The album is excellent to play in the background when reading or studying, it’s soft enough not to distract but upbeat enough to help with focus. Enjoy with a nice glass of iced coffee or tea.